For the past six months, a deadly crisis has been unfolding in the Democratic Republic of Congo (DRC). You may not have heard it on the news, but it’s the second largest Ebola outbreak ever recorded. The deadly disease has already killed 1,117 people – 30% were under 18.

Just earlier this week the situation got even worse. Two Ebola treatment centres were attacked and burnt down. The remote North Kivu region has seen decades of devastating conflict and the volatile and insecure environment makes it even harder to combat the spread of this deadly disease.

Now more than ever, together with our local partner, we need to step up our work within local communities to reach as many people as possible and prevent the virus from spreading. We’re extremely worried that sick people may stay away from treatment centres following the attacks, spreading Ebola at home and in their communities. Educating families and children on keeping safe has never been so important.

Hundreds have died and many more are at risk

In August, the World Health Organisation declared a new outbreak of the deadly Ebola virus in North Kivu, where we run education and justice for children projects in Goma and Kibati. 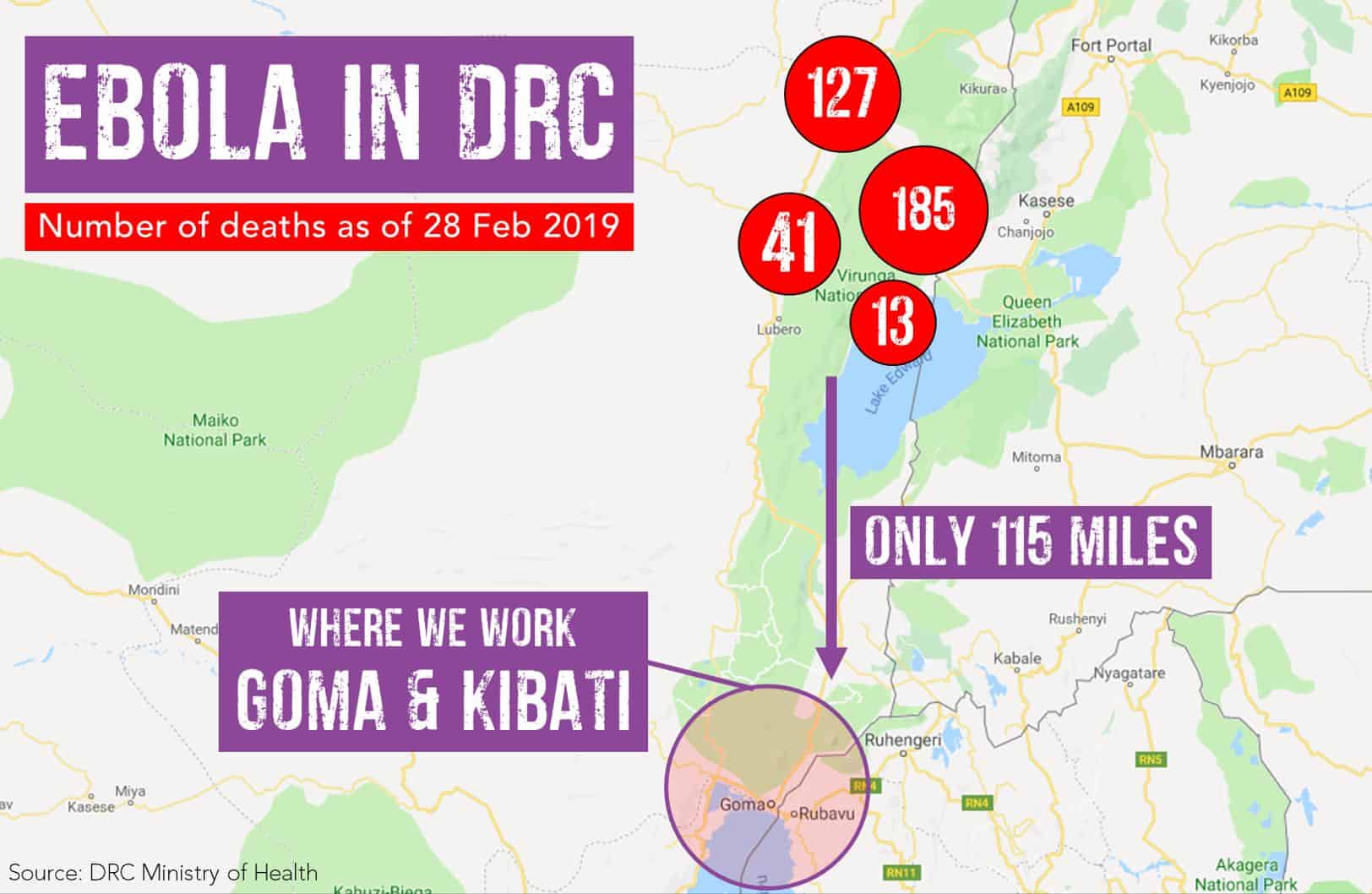 As Alessandra Podesta, our DRC Country Representative, explains “Ebola spreads quickly and the lethal disease is now only 115 miles from the vulnerable children, families and communities we support in Goma and Kibati. Our main concern that the recent attacks on treatment centres will increase the spread of Ebola. We must act quickly to make sure that 3,000 children can access vital Ebola prevention campaigns. We’re urgently raising funds to extend our prevention work to a further nine schools and their local communities.”

We’ve been running Ebola education campaigns since August. We have so far educated 2,650 children, 800 adults and 300 public transport users on what they can do to keep safe. Members of the communities we’ve reached now know how to identify the symptoms and are taking simple measures to prevent its spread. We have provided hand washing facilities to schools and kits to allow others to install them at home and in workplaces.

We’ve also used radio to reach those living in rural areas. By broadcasting across North Kivu, over 120,000 people have received information on how to keep safe.

Please click here to donate to our emergency appeal. You could help save lives today.

The Ebola virus is a severe acute viral illness often characterised by the sudden onset of fever, intense weakness and headache, quickly followed by vomiting, diarrhoea, impaired kidney and liver function, and in some cases, internal and external bleeding.

Ebola first emerged in the Democratic Republic of Congo in 1976 and it is thought to infect humans through contact with infected animals. It can then spread among humans via bodily fluids.

Currently, there is an experimental vaccine offering a glimmer of hope and could have a major impact. However, the ongoing conflict and limited supplies mean the vaccine can’t be distributed widely enough to keep Ebola contained. The most commonly used treatment is to keep the patient hydrated. Patients have a better chance of survival if they are diagnosed early and receive early treatment. This is why education is so important to saving lives.