I have only been in Accra for 24 hours, where I am visiting Chance for Childhood’s project supporting street-connected girls and young mothers, and already my mind is racing at the fast and furious pace of the bustling city. The economy of Ghana has been growing exponentially over the past two decades, and a ride through the endless traffic in the capital probably offers the best views of the chaotic spectacle of hundreds of vendors and porters flooding every stop and corner of the streets.

In contrast, our local partner’s temporary shelter, located just half an hour from the city centre, seems like a safe and peaceful haven. The centre is fittingly called ‘House of Refuge’, and offers short-term accommodation and rehabilitation support to up to 30 teenage girls who have become pregnant whilst on the street.

This is where I meet Cindy*, just 17 years old and 6 months pregnant. She comes from a rural village in the Ashanti Region, having left behind all of her friends and family hoping to make it in the big city.

I ask Cindy what prompted her to leave, and she recounts: “I came here to sell iced water on the street. Two girls from my village returned from Accra last year, telling tales of success and career opportunities, describing the streets of Accra as literally ‘lined with gold and money’. But life here was never what I expected. It is the survival of the fittest’.

Cindy is one of thousands of girls and young women migrating to the capital every year, certain to find a job, save money and return home after a couple of months; months which often turn years. Once on the streets of Accra, competition is fierce. There are an estimated 60,000 female head porters and vendors fuelling the city streets and local markets, pushing wages to unprecedented lows. It is a harsh reality check for young girls like Cindy, and sadly often the first step into a cycle of abject poverty.

After one too many nights spent sleeping rough in a bus station, hungry and fearing they will get robbed or assaulted at any moment, many girls turn to transactional sex, in exchange for a blanket or a meal. Many eventually become pregnant.

Our project is reaching out to these girls and young women to offer them support and advice; the chance to learn a vocational skill at our centre, to learn how to protect themselves and access essential services and information. For pregnant adolescents like Cindy, our House of Refuge offers a safe space to continue their pregnancy, complete their training and reconnect with their families.

“I told my family what happened to me. Their first reaction was disappointment” tells Cindy.

For a moment I try to imagine how different my life would have been if I had become a single mum at 17, still battling the trauma of months spent of the streets and suddenly becoming responsible for a baby, with little encouragement from my family. 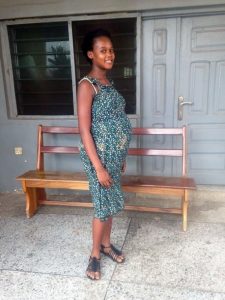 I try to adopt an encouraging tone and ask Cindy if she is looking forward to having her baby. She turns her eyes away and mutters “Not really. I just want to deliver the baby safely”. She adds: “I want to go back to my village and tell other girls about my story.  All that glitters is not gold; money does not always mean that people are living and working in dignity”.  I learn later that the two girls who visited Cindy’s village had in fact become full-time commercial sex workers, to survive in the city.

As our partner’s social worker Rose takes me on a tour of the streets of Accra in the following days, I can’t help but see young Cindys everywhere; dozens of adolescent girls carrying heavy loads, some of them with their babies, other sleeping on the floor in bright daylight, completely exhausted and weakened by street life.

Alongside prevention and advocacy work sharing stories like Cindy’s, our social workers work tirelessly to reach these girls as quickly as possible once they’ve arrived on the streets. We believe children deserve to stay children until they are truly ready and supported to transition into a dignified life as an adult – this should never be at the cost of losing all of their hopes and dreams for their futures, trapped in a life of abuse and poverty.

* Cindy’s name has been changed to protect her identity.