Segerien Donner, one of our speech therapists in Rwanda recounts how she organised a workshop for parents of children with communication disbalities

I will probably remember the past week as the most beautiful one of our entire stay in Rwanda. The training week with Rwanda National Union of the Deaf and 20 young deaf children (2 – 6 years) with their parents brought several tears of emotion and was a huge success. 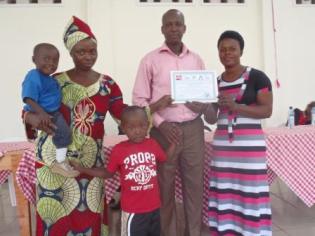 It has long bothered me that deaf children do not develop language until they go to school, i.e. not until they are 7 years old and then only if parents have the financial means to send them to a school for the deaf. There is an excellent school where children can attend from the age of three, run by Italian nuns, with strict discipline, but also a lot of love for ‘their’ children and an excellent education, both orally and in gestures. They can accommodate 20 new children every year when parents can afford it or have managed to find a sponsor for + € 250 per year. 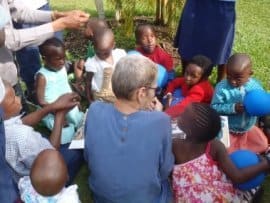 During the mapping of persons with disabilities in which I was involved in Musanze (northern Rwanda) last year, we met so many young deaf children that the desire to organise a training camp for them grew stronger. When early this year we found the funds, it suddenly went very quickly as we had to finalise all by the end of the financial year on 1st April.

An interesting hurdle was to sensitise the sign language instructors, who are all deaf, to the needs of young deaf children. They have learned sign language when they started schooling and had the impression that was normal. A video of a two- year-old deaf girl (http://www.youtube.com/watch?v=3o8Z2lzS764) who communicates with her mother in sign was an eye-opener which immediately made them decide they wanted to make this possible for children in Rwanda too. Training approach and – material had to be adapted to the needs of young children and their parents, and the vocabulary found to match it.

During the training week we would focus on teaching sign language to the parents, and that we would do that in such an exciting way that we would draw the attention of the children as well. With real fruits and vegetables we played hide and seek and pretended to go shopping and the kids thought it was very funny to see their parents having so much fun. Eating the fruits was of course part of the program, though not exactly at the time the kids wanted it, but when the clothes we had purchased as instructional material had to be given back after the masquerade, the grief was great! 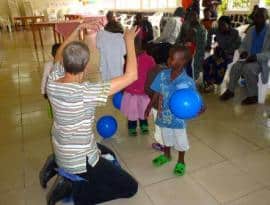 I had done my best not to make the clothes look too good, but little girls like new clothes just as much as big girls do! touching moments. I did not expect this would happen as soon as the second day of the training camp. In the afternoons the oldest students of the local school for the deaf would join us to play with the children and act as role models for them and some did that in a very charming way. Where picture books were initially set aside as not interesting enough and too vulnerable, everyone gradually discovered what a great source of vocabulary, communication and fun they can be.

The parents did games at being the first to recognise a sign, went shopping and played lotto and bingo to practice with the signs they had learned. They also experienced that a mistake can be interpreted as funny or a joke and need not always to be condemned with a strict ‘no ! ‘ or ‘wrong. We passed cultural boundaries and parents loved it so much  that if one had to go outside for a while with a whining child, they would continue to take part in the learning at the window! In five days the vocabulary for everyday activities and encounters, feelings and questions was presented and practiced and from there parents now need to continue the work with their children. 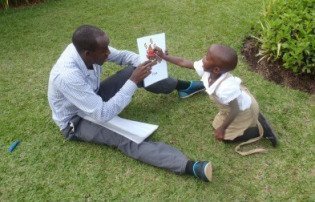 In three months, we hope to visit all families to see how they are getting along. We have been asked to evaluate how to organize similar training in smaller groups to cut down on the expenses, and then at least one of the sponsors would be happy to participate again! At the opening of the training week we had of course traditional dances by deaf students who either felt or heard the drums or did very well in timing their movement to those of others. And of course a training has to be recognised as such, so we gave a certificate to every child and to their parents.