As the Ebola crisis in the Democratic Republic of Congo worsens, we spoke to Christine Musaidizi, the Director of our local partner Children’s Voice. She talked to us about her work with vulnerable children in the area as well as the fight against Ebola. 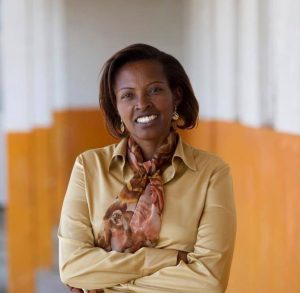 Tell us about your role and what inspired you to start

I co-founded and am the Director of Children’s Voice, having worked with the organisation since 2004.

My own motivation is to help both the community and our government to learn about, and be actively involved in, child protection. I saw, and still see, a lot of challenges such as war and armed conflict, poverty, ignorance about child rights and weak government systems – and that is what motivates me to contribute.

What is the most rewarding part of your job?

When I see a child coming from a bad situation and work hard to change their life. Among the children we work with are former child soldiers, street children (some of whom have been in prison) and girls who have faced abuse. To see them go to university and become teachers, lawyers or run their own business is the best reward I could get!

What threat does Ebola pose to the children you work with?

Ebola poses a huge threat to children. If it isn’t the child that gets sick themselves, it could be their father, mother, or siblings.

It’s serious and real. If just one person, a member of staff or a child, is contaminated, this is enough to spread it to every child and their families. In our centres alone there are around 2,400 children at risk.

What are you doing to protect children against the Ebola threat?

We’re giving out as much information as we can to communities about Ebola, telling people how to protect themselves and measures they can take to identify someone who is sick and what to do in that case. As well as teaching this to children in our schools, we’re informing communities through loudspeakers and a regular radio programme.

We have a robust contingency plan to deal with the threat. All of our staff have been trained on preventative and hygiene measures, and all of our schools and offices have handwashing facilities and sanitation tools.

What are the main challenges you face when carrying out prevention work?

One major problem we face is that the area where Ebola started is part of the opposition to the government. The spread of misinformation has meant that many people doubt Ebola is a real threat, or even exists. This isn’t helped by a lack of information about the intervention by health workers, who come from other towns and aren’t integrated in the communities.

The North Kivu region has also been hit by armed conflict for many years. People in the area feel they have been abandoned by the government who haven’t been able to stop people being killed. They question why the government has now been able to intervene to stop Ebola and not the war. Yet the area still remains insecure and the people live under the threat of rebels and armed militias.

In our prevention activities…

We face resistance from some community members because of the misinformation as well as resistance to the vaccination. On a practical level, we are under-resourced. We don’t have enough handwash kits, and there is a lack of sufficient materials to mass-educate citizens on keeping safe.

In some parts of Goma, and at our schools, there isn’t enough water for handwashing as we are in the dry season and there is no rain. There is also a lack of basic Ebola identification equipment, like thermometers to detect high temperatures. 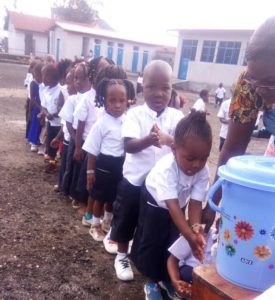 We’re thankful for the support and assistance of people in Great Britain during this hard period as we face this terrible Ebola epidemic.

The threat is still here and every day there are new confirmed cases. Your support is needed to help us overcome Ebola.

Click here to donate to our emergency Ebola appeal.